“The church was created in 1630 when settlers constructed a meeting house two years after arriving in what is now Charlestown, MA. The original structure was near what is now State Street. The church eventually transformed into a theologically liberal Unitarian Universalist congregation by the mid-nineteenth century, along with many of the other state churches in Massachusetts.

In the nineteenth century, the First Church moved to Back Bay in Boston. The building at 66 Marlborough Street in Boston dated from 1867 and was designed by Boston architects William Robert Ware and Henry Van Brunt. After a fire in 1968, First Church and Second Church merged and built a new building at the same location. This building, by architect Paul Rudolph, incorporates part of the facade of the 1867 building. ”  – http://en.wikipedia.org/wiki/First_Church_in_Boston 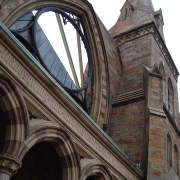 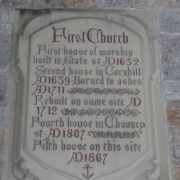 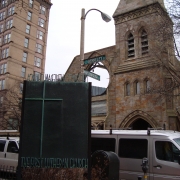 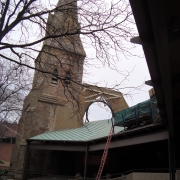