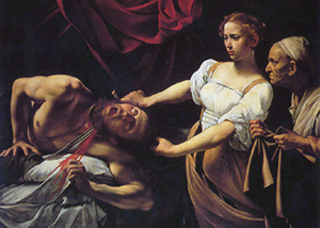 The Story of David & Goliath:

When David was a young shepherd, his people were threatened by the Philistine giant Goliath. David approached King Saul and insisted he could conquer the giant, even though he was not a soldier, and could not even fit into armor. David used his shepherd’s sling to shoot two well-aimed rocks at Goliath?s head. Goliath fell, and David grabbed his abandoned sword and used it to cut Goliath’s head off. David returned triumphantly carrying Goliath’s head.

The Story of Judith & Holofernes:

In response to the threat of General Holofernes and his army, Judith, a beautiful Jewish widow, pretended to betray her city of Bethulia. She left with her maidservant, Abra, traveled to the enemy’s camp, and told the soldiers she intended to help them. Upon hearing this, Holofernes invited her to dinner. Inflamed by her beauty, he dismissed all his other guests, but Judith enticed him to drink until he was significantly weakened. She stole his sword, cut of his head, and called to her maidservant, who helped her to stuff the general’s head into a sack. The women escaped unnoticed, returned triumphantly to their people, and in the morning, when the headless Holofernes was discovered, the people of Bethulia overpowered their disoriented enemy.

There are many similarities in the stories of the biblical heroes David and Judith, and yet artists treated their stories very differently. Both David and Judith were unlikely heroes who overcame the odds and single-handedly saved their people from a fierce enemy by decapitating the enemy leader. Paintings of David illustrate his heroism and bravery, and paintings of Judith should show the same traits. Instead, paintings of Judith often depict her as weak, passive and barely able to wield a sword, while emphasizing her beauty and sexuality. Rather than giving her credit for heroically saving her people, painters twisted the theme of Judith into a warning to men: don’t let your guard down around beautiful women or you’ll lose your head!

The young shepherd boy who slayed the giant Goliath later goes on to become the beloved King David, and the story of David and Goliath is meant to illustrate that David was skilled, brave and favored by God even from a young age. Paintings of David and Goliath emphasized David’s youth and Goliath’s size to show how the unlikely hero triumphed over the enemy. Artists depicted David as undeniably heroic.

Judith’s story is also meant to illustrate one of the many times that God favored the Israelites against their enemies, and that He especially favors those who are devout. The Book of Judith goes in to great detail about Judith’s devotion to God, her wisdom, and her brilliant scheme to gain the enemy’s trust in order to decapitate the general and escape with his head. Are paintings of Judith undeniably heroic? Sadly no, many of them are not.

The story of Judith is full of juicy details that made it all to easy to portray Holofernes as the victim of a cunning woman. Many of these details are twisted to support the use of this theme as a warning to men about the dangers of beautiful women. For example, the story describes how Judith dressed in her finest, adorned herself with jewels and then God made her even more beautiful. How could Holofernes have stood a chance? Judith is described at length as a devout and faithful woman. Holofernes wasn’t really defeated by a woman: it was God acting through a woman. Judith had an elaborate scheme to gain Holofernes trust by pretending to abandon her people and promising to share their secrets. Women lie and can’t be trusted!

The one detail that is not in the story is the one that artists seem to exploit the most. The story says that Holofernes was filled with desire for Judith, and nothing more is said. Many artists used their imagination and portrayed Judith in various states of nudity. Holofernes thought he was about to to sleep with Judith when she decapitated him. Women don’t play fair!

Judith’s maid is one of the most fascinating aspects of many paintings of Judith. As a wealthy widow, Judith brought her maid with her when she pretended to betray her people, and she asked her maid to wait outside the tent while she decapitated the general. Many artists included the maid in the tent with Judith, usually as an eager co-conspirator. The only thing more dangerous than a beautiful woman is two women working together.